Posted by Valerie Finnigan at 11:18 PM No comments:


Posted by Valerie Finnigan at 9:56 AM No comments:


Posted by Valerie Finnigan at 7:25 AM No comments:

Tiger on the Storm vid


Posted by Valerie Finnigan at 9:49 PM No comments:


Posted by Valerie Finnigan at 5:23 PM No comments:

A Scrooge about Christmas Carols?

A Scrooge about Christmas Carols?
Posted by Valerie Finnigan at 10:44 AM No comments:

With the release of Untold Stories from Iraq and Afghanistan earlier this year and the seventieth anniverssary of the attack on Pearl Harbor coming up, it only stood to reason that it would be a long, busy, and amazing Veterans' Day. And how!

Veterans' Day may be on November 11, but for me, it started a couple of days before. A shipment of books arrived, and the local comic book store wanted me to sign a couple of copies for their customers. My visit there was pleasant, but quite unlike what my daughter got to do that day, short and simple.

Her school hosted a luncheon for the area veterans that was capped with a school assembly. The assembly included a Boy Scout honor guard presentation, readings of award-winning essays from students, music and dance numbers, and- as the veterans from World War II all the way up to those recently returned from Iraq or Afghanistan were introduced to the school- no less than a raucous ten-minute standing ovation.

What kept my daughter busiest, however, were the interviews she conducted with some of the veterans of World War II, including a few members of the famed, "most decorated and decimated" 442nd Infantry. The perspectives of these men, many of whom went into the Army from the Japanese internment camps, can come as a shock to a generation largely unaccustomed to responding to negativity by rising above it. That's all the more reason why it's important that they be heard. At any rate, their stories and messages made a real impression upon my daughter, who came home from school with a greater understanding of what dedication and integrity really mean.

The next day, being November 10 and the birthday of the Marine Corps, proved to be another very special part of what began to feel like an extended Veterans' Day celebration. I was supposed to do a reading of "Yea, Though We Drive Through a Tier One Hot Spot" at Madison Public Library, but had to cancel for a couple of reasons. First of all, I struggled slightly with the request that the story be "clean." The little bit of profanity in there was, of course, easy to omit without sacrificing fidelity to the account as provided by SSgt. Kyle Hausmann-Stokes. But I worried that the folks at the library would take exception to a frank explanation of what the "pucker factor" is, and I was not about to leave out some of the story's best lines in case someone might find it offensive.

But the main reason I cancelled is because I would not have been able to put in a good enough appearance at the Marine Corps Ball and get to the library on time. As it was a work night for my husband, he was unable to take me there, so I asked my son if he'd like to go. His face lit up. As he had made no secret of his desire to be a Marine when he grows up, he accordingly jumped at the chance to dress up and take part in Marine tradition. He happily OOrah-ed, sang the Marine hymn with perfect gusto, and is thoroughly convinced that the coolest way to cut a birthday cake is with a sword.

I also ended up autographing a lot of books with "Oorah!" or "Semper Fi!" that night.

But that night was most notable for a couple of more solemn moments. Making an entrance that was inevitably dramatic due to its tardiness were a couple of young officers, brothers by blood as well as sweat and tears, one of whom had only relatively recently lost both legs to an IED attack. My son was very quiet for a long time after meeting them. Then, on the way home, he said he now better understood what risk and sacrifice mean. And he still wants to be a Marine.

Veterans' Day itself proved to be a relatively calm day for me. I read a remarkable account of a local soldier whose only reason for not having five Purple Hearts was because he turned down the fifth. I also attended a flag raising with one of the area VFW posts, was impressed to hear a class of fifth-graders sing three whole verses of the "Star Spangled Banner," and was touched to see due recognition given a schoolteacher whose son is currently fighting in Afghanistan. That night, a celebration of Bonneville County's centennial also included tributes to our local veterans, with the presentation of colors done by the VFW and patriotic music by the Eastern Idaho Technical College wind ensemble and the Idaho Falls Fire Department Pipes and Drums.

The next day, all the snow in the world couldn't keep me away from Pocatello, with their parade and an entire day of events to honor the veterans. I met a lot of remarkable people, from World War II veterans with stories from Okinawa or Nazi POW camps, to an extraordinary little girl who, at only four, already knows a thing or two about caring for combat-wounded family members. I told one man that this Veterans' Day had been the most amazing to me since 1989, when the Berlin Wall had fallen. He then gave me a weird little look and said, "But Veterans' Day was yesterday."

"I know," I replied, "but it didn't end yesterday." And neither did my observance end there. That night included an American Legion dinner. Then, Sunday morning, I visited a nursing home and read "Yea, Though We Drive Through a Tier One Hot Spot" to the old vets there. They laughed at the description of the pucker factor.
Posted by Valerie Finnigan at 8:05 PM No comments: 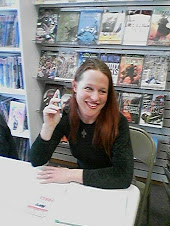